I believe that technology and democratization goes hand-in-hand. If you examine the now-commoditized products listed in this article (PC, software, TV, trading commissions, camera, cell phone plan), you can also follow how such technologies became much more widespread and accessible to the masses as prices dropped.

The subtitle of the article boldly proclaims, “behold the power of American progress”! And it’s interesting to me that the author (Aki Ito) states:

For anyone bearish on the progress made by the U.S. economy, consider this: Computers are now one-1,100th of their price 35 years ago.

On the contrary, I believe that much of this price deflation actually comes from international manufacturers (read: China, India, etc.) who are able to produce virtually the same item at a fraction of the cost.

With those two factors in mind, tech advancements and cost-efficient copycats, here are few things that I believe will face the same deflationary pressures over the next decade:

On the other hand, there are a couple of things I wish would drop in prices, but I think unfortunately will continue to rise:

What do you think will become cheaper or more expensive over the next decade?

Khazan: What about people who say that there is a paralysis of choice—that online dating makes us non-committal because we can always go on a date with somebody else?

Yagan: I think that means you end up in a better relationship. When you decide to stop going on OkCupid dates, it means you’re happy with the date you have. I think one reason we have high divorce rates is because people have had limited pools. You only had the pool of people who lived in your town or who you went to college with or who go to your gym.

Relationships that start online are much more heterogeneous than those that start offline by the simple nature of the fact that the people near you are more similar to you than the people who span a broader geography. So I think it gives you much better selection, not just more selection..

My friend, an Econ PhD candidate at Berkeley, and I have often debated the merits of online dating. (Fun fact: we actually met on OkCupid.) Our conclusion is that online dating is best for folks with edge preferences, as it offers better filtering and wider top-of-the-funnel.

I like Yagan’s answer on the paradox of choice because it proposes marital satisfaction in America as a “smile” or J curve. Social media and online dating has decreased friction for unhappy relationships/marriages to end and for folks to start new relationships. At first, this could contribute to an uptick in divorce rates, but over time, the hope is that more data and wider top-of-the-funnel will result in happier couples. 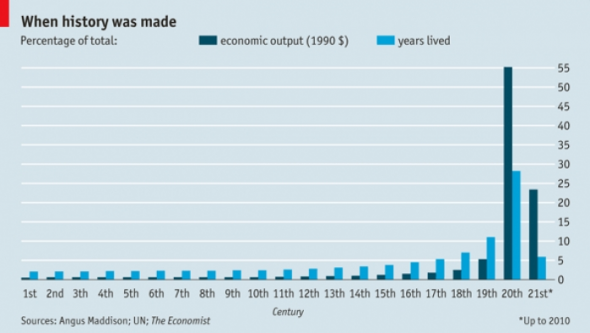 A very upbeat Business Insider article celebrated the exponentially growing Global Economy with this graph from the Economist. While I have no doubt this is true, I also suspect that if we calculated “economic output” per capita, we’d get a much more conservative outlook.

Unfortunately for very literal Christmas carolers, 2011 was the most expensive year yet for following the song’s shopping instructions.  Read more.

Actually, should be a lot more if you take into account all the gifts for all 12 days. This only calculates the gifts one would be getting on the 12th day of Christmas, but what about the first 11? By my count, you’d end up with 12 partridges in 12 pear trees, and not just one, by the end of the song.

DR. Dre, the sonic architect of gangsta rap, is surrounded by a gaggle of slack-jawed journalists and micro-skirted cocktail waitresses. It’s not quite 5 in the afternoon, and already the scene is a testosterone fantasy of swaggering grooves and flowing vodka. Dr. Dre, however, is here on business.

Born Andre Young, he was a founding member of N.W.A. and honed the sound of Snoop Dogg, Eminem and 50 Cent. But now what began as a sideline has turned into multimillion-dollar business. Mr. Young is the pitchman for the hot new sound in — headphones. On this October day, he is headlining a media party in the Chelsea neighborhood of Manhattan for his creations, Beats by Dr. Dre. To the surprise of almost everyone, except him and his partners, Beats have redefined the lowly headphone, as well as how much people are willing to pay for a pair of them. A typical pair of Beats sell for about $300 — nearly 10 times the price of ear buds that come with iPods. And, despite these lean economic times, they are selling surprisingly fast.

I’ve always been interested in market-defining products; ones that are late entrants to an already highly-penetrated market, and yet still manage to change these market dynamics to come out on top. Beats by Dre is such an example, as are products like Red Bull energy drink and Apple’s iPod. When Beats was created in 2008, the portable music player industry was already mature. When Red Bull entered the US market in 1997, the energy drink market was in perfect competition with a number of undifferentiated products at the same low price point.

Perhaps a lot of it has to do with branding to differentiate itself from the other players. Dre used his connections with the music industry to feature his headphones in music videos, movies, and high-profile events. Red Bull aggressively sponsored all kinds of extreme sports events, and to this day, continues to brand cutting-edge and underground events such as Red Bull BC One and Red Bull Creation.

However, the argument can also be made that the conditions of a highly-commoditized market are ripe for disruption. First, it helps that a market already exists and is highly penetrated; consumers don’t need to be educated on the product’s value proposition. Second, it definitely helps to better understand the challenges and pitfalls that competitors have previously faced. Third, of course, comes down to understanding the competitors. To see examples of other late entrants who are dominating markets, please see this Quora discussion.

There are convincing reasons why Marathon winners are rarely runners that have led most of the race. Perhaps the same dynamics apply to consumer goods as well.

(Unnecessary disclosure: I am a recent owner of a pair of Beats by Dre. The first generation Heartbeats by Lady Gaga ear buds, to be exact.)

How to Succeed in Business (by showing up late)

When a consumer picks up a tablet, it’s the experience that matters – What can this device do? How smoothly does it run? Can I take it outdoors with me without worrying about a power source or sun glare?

For this reason, Amazon has been very smart in how it chose to position the Kindle Fire: as a content delivery platform instead of a piece of hardware. It’s the first tablet released without emphasis on the processor speed, amount of ram, or Bluetooth capabilities. While specs are often a hot topic of debate between nerds and geeks, the mainstream consumer won’t know the difference between a Snapdragon or a Hummingbird processor. The focus at the Fire’s release was instead on what a user could do with the device and the accessibility to content. With their massive eBook library, the newly released video streaming services with Amazon prime, and a growing Apps market, Amazon has created a seamless integration of content and delivery platform. It’s no small feat for a company that began selling paperbacks online in 1995.

With the Kindle Fire, Amazon has entered the tablet market in the same way Apple revolutionized the MP3 players space with its first iPod. The Kindle Fire also has the same potential to move tablets further past the early adopters stage, just as how the iPod served as a catalyst that mainstreamed the MP3 device. Despite being so late-to-market, Amazon makes up for lost time by paring the product down to its core features and giving users a unified experience across all its products. (Amazon’s Press Conference style was also eerily similar to Apple’s. Thanks to Jobs’ flair, no tech company can go back to less-than-climactic product releases ever again.)

With the tablet market exploding (303.8% y-o-y growth in 2Q11) and Apple’s stronghold of a market share (currently at 68.3%), this space is ripe for some disruption. The Fire will help Android gain marketshare, but it’ll be hard to unseat the iPad as the premium device in this category. The Fire is also aimed at a different consumer segment – the more casual tablet user without a large wallet. With the 7-inch screen size, the Fire has a potential advantage of the iPad in terms of ultra portability. And at $199, the price is oh-so-right. I’m definitely rooting for the Amazon Fire. It’ll be nice to see someone best Apple at its own game, for once.